With the so-called super-moon shining brightly outside the chances of successful meteor observations are pretty low due to the light of the moon washing out the fainter stars and of course meteors too!

But as the weather prospect for the next few nights is pathetic I set up the camera and took 434 shots using my Nikon D7000 with the Samyang (Rokinon, Walimex) 14mm f/2.8 camera at f/2.8, 2,5s and ISO3200. One of the frames actually captured a quite bright meteor: 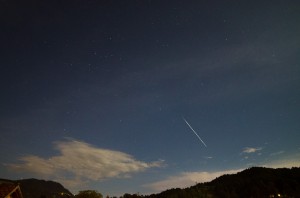 As the exposure time has no influence on the capture of meteors due to their high speed I choose a high sensitivity and a wide aperture to capture the faintest meteors possible. The exposure time was adjusted to give a reasonable sky brightness.

This is a cropped version of the image above, showing more detail of the meteor trail: 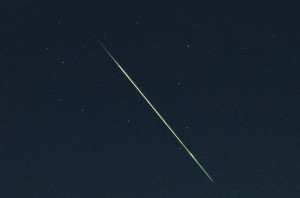