I was actually heading to bed when I noticed, that the sky cleared up enough to try to photograph Comet 64P/Swift-Gehrels.

As I wanted to create an image that included the Andromeda Galaxy, I used the 70-200 zoom and set it at about 130mm.

The comet is the blue-green dot near the bright star (Beta Andromedae) at lower left.

When I looked for the comet using 12×50 binoculars, I could barely see it, M33 in comparison was much larger and brighter. 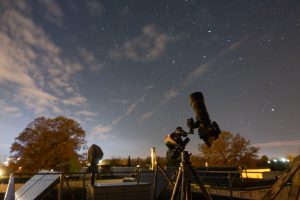 This is the setup I used for the shot above.